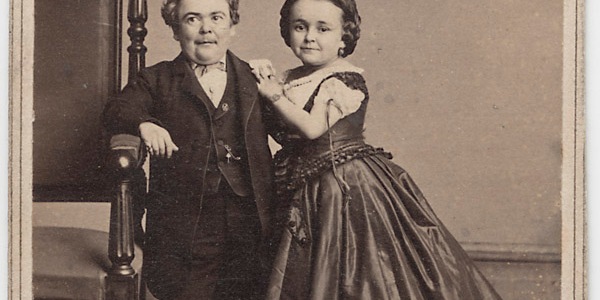 My biggest collecting theme so far is Tom Thumb. I got started when I was first starting to collect CDVs and found one of the Tom Thumb wedding photos by Brady with the facsimile signatures on the verso. Lately I’ve been spurred in my collecting to see if they can outdo Frederick Douglass in their image-making as the most photographed people of the 19th century (see my blog post about Tom Thumb and Frederick Douglass)

This is another CDV of Tom Thumb and his wife, Lavinia Warren, by C.D. Fredricks. I think I’m up to 25 now, and I know there are at least a dozen more images I don’t have that are in reasonably widespread circulation. I don’t think I have any that are particularly rare. This was a very nice acquisition as it is in near-mint condition and the print is exceptionally sharp and fresh.

What are some of the distinguishing features of a CDV that can help you date the image? Fashions worn by the subject, certainly. Hand-written dates and identifications on the verso, yes. The photographer’s information on the verso imprint – often times with better known studios, the dates of operation at a particular location are known, so seeing a particular address would give you a window of when the image was made. Another clue is the style of the imprint – in the early days of the CDV, photographers’ imprints were little more than a name, perhaps a motto, and an address. Later CDVs (starting in the late 1860s and progressing through the end of the CDV period) have more ornate logos on the verso, a trickle-down effect from the more popular cabinet card.

When much of this information is not available, though, how can you tell? There are many CDVs out there that have no imprint, and no identifying information recorded. One way is through the pose. It is rare to find a US Civil War era CDV shot as a tight head-and-shoulders portrait. Such is the case in this image. A post-war portrait, you can tell first through the image composition. Next is his facial hair – while sideburns (so named after the Union General Ambrose Burnside) were around and popular during and even before the war, this beard style is later. The uniform style also has clues- the lapels of his jacket are a post-war style. I’m no expert on military uniforms, but with a bit of careful research, uniforms can help you date the image sometimes within a several year period if there is a particular piece of equipment or clothing displayed that was only issued briefly.

In this particular case, I’m very lucky – the photographer, C.D. Fredricks, is one of the best-known photographers of the period, and a very early adopter of the CDV format. I have early C.D. Fredricks CDVs that show just his slogan, “Specialité”, along with his name and studio address, on the back. I also have some that show his multiple studio addresses in Havana, New York and Paris.

I’ve been fascinated by all things U.S. Civil War, and, since I live in Washington DC, things related to Abraham Lincoln and his assassination. The assassination radically altered the course of post-war politics, economics, and society, and even today 150 years afterward we are still experiencing the after-effects and reverberations of that one pistol shot. I’ve done several guided history tours of Washington DC with Lincoln’s assassination as a topic or the primary theme, including the wonderful John Wilkes Booth Escape Route tour led by the inimitable Ed Bearss (seriously, if you have the opportunity to take that tour, DO IT, NOW, while Ed is still leading tours. He’s a brilliant Civil War historian and a great tour guide, and at 91, not going to be doing them too much longer). I’ve been in Ford’s Theater to see the stage from the Presidential box, heard the tale of the timing of the fatal gunshot, walked the path of John Wilkes Booth as he fled the theater, and read the stories of the cast and crew who were working at Ford’s Theater that night.

In the course of my collecting, reading and research, I’ve seen photographs of Abraham and Mary Todd Lincoln, John Wilkes Booth, Mary Surratt, the other conspirators, Generals Grant, Sherman, Butler, Burnside, Hooker, McClellan, a whole host of lesser Union generals, Henry Holt (the union general who prosecuted the conspirators), Major Henry Rathbone and Clara Harris his fiancee who were in the Lincoln’s theater box that night. I have very clear mental pictures of these people. I have photographs of other actors from the period in my collection too. But I’d never seen images of the cast and/or crew of Ford’s Theater on that night. Laura Keene’s name is well known if you’re familiar with the Lincoln assassination story, but I dare you to say you’ve seen her picture before unless you’re truly an assassination or 19th century theater geek.

Now you have. The photo is by C.D. Fredricks, of New York, Havana and Paris. Charles Fredricks was one of the most sought-after portrait photographers of the day, and specialized in theater personalities (I have photos of Tom Thumb, his wife, other circus freaks, and George Pope Morris, a 19th century American poet in my collection). Laura Keene played Miss Florence Trenchard, one of the principal characters in Our American Cousin. She was one of the better known actors of her day, even having her own theater in New York, where Our American Cousin premiered. The performance of Our American Cousin that night was her last night in the play at Ford’s Theater, and the night had been declared a “Benefit Night” for Laura Keene. A “Benefit Night” was a 19th century practice where a significant portion of the proceeds from that night’s ticket sales would go to benefit one actor or actress, usually the lead; it was a form of gratuity to compliment them as they were usually the big box office draw and helped make the show’s run profitable. The assassination of Abraham Lincoln that night broke the near-inviolable rule of the theater: the show must go on. The performance ended with John Wilkes Booth’s leap to the stage and shout of “Sic Semper Tyrannis”, as did Ford’s Theater itself – it never re-opened as a theater in the 19th century after the assassination. It was seized by the federal government, with the idea that it should never be used again for theatrical performances. It became a warehouse for government records, and languished, neglected for decades. It was not until 1968 that the theater was restored and re-opened. 103 years after that ill-fated performance of Our American Cousin, actors once again strode the boards at Ford’s Theater.

Today, you can visit the theater and take guided tours of the auditorium, see the Lincoln box recreated as it was the night of the assassination, and explore the basement where numerous artifacts of that fateful night are displayed including Lincoln’s wool dress coat and top hat he wore to the theater that night, Booth’s pistol that fired the fateful shot, and the bloody pillow that Lincoln’s head rested on as he lay dying at the Petersen House across the street.